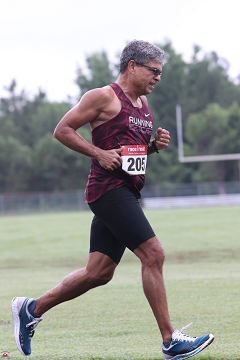 In June of 2014 I was 260 pounds. I decided to make a change for the better and started jogging as a ‘cheap’ way to lose weight (little did I know how untrue that would be, LOL). I downloaded Couch to 5K and did my first 5K in October 2014. I got hooked on running and ran my first Half Marathon in March 2015. I continued the drive to be a better runner and I started training with group runs that Running Etc. sponsored. By August of 2015 I had lost 100 pounds and reached my goal weight. I finished my first marathon (the Marine Corps Marathon) in October of 2015. During this time I was also asked to pace my first half marathon with the Running Etc. Pacing Team that paces J&A races. I am truly grateful that I was given a chance to give back to the running community, and I derive a great deal of joy in encouraging fellow runners to reach their goals.

I am truly humbled that I have been asked to be as a member of the Running Etc. Ambassador Team. It is truly an honor to represent the best running store ever! I take the role of Ambassador very seriously; it is not one to be taken lightly. To be an ambassador, one needs to stand out as a positive light in our running community, and encourage those around you as an inspiration. And most important, help others to reach their goals. Thank you Running Etc. for being a partner over the last few years. I owe a debt of gratitude. As an ambassador, I can only hope to repay a fraction of what this store been given me over the past few years.