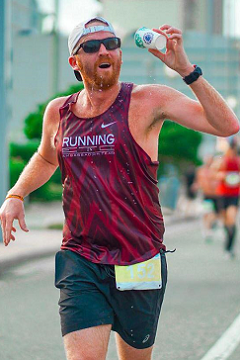 Dean was born and raised in Richmond, VA. After attending CNU, he moved to the beach to chase a career in television production. After several years of living here, he began running with his wife in 2021 as a way to try and be healthier and lose some weight. It first started with 5K and 8K races and eventually evolved into running half marathons by 2014. Becoming a better runner and a faster runner soon became Dean’s addiction. Two to three races a year quickly became 15-20+ each year. Dean has now run countless races at the 5K, 8K, and 10K distances as well as over 20 half marathons and four full marathons with more in the future. His two favorites distances are the 10K and the Half, although he is really starting to fall in love with full marathon distance too! As he began to run more and more, Dean started meeting new people by joining different social running organizations/clubs such as Endeavor Running Co, Tidewater Striders, B.U.R.P, and FOMO. The social aspect of running has become one of his favorite things about running. The running community is so supportive of each other and Dean is excited to be a part of it. His motivation is to continue running to maintain his health for his family and children. Dean has two very memorable moments in his running career to date, the first being finishing his first marathon. There is nothing like crossing the finish line after the months and years it took to prepare for that moment. The emotions are indescribable. His second memorable moment was when he paced his wife for her first half marathon in 2015. After a 16-week training session with 2:30 goal, she crossed the finish right at 2:30 in the Shamrock Half Marathon. Dean's Coolest race experience was running the Las Vegas Rock'n'Roll Half Marathon on the strip at night under the lights! The last couple of years, Dean has had the pleasure of watching his son run the Leprechaun Dash at Shamrock and the joy on his face is a true proud Dad moment. Dean is looking forward to the next time he laces em’ up!