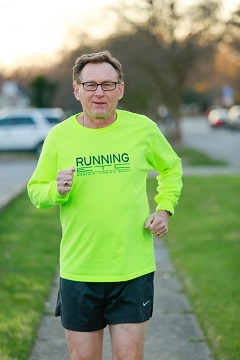 competed in track and cross country at Old Dominion College then served in the Air Force for four years. Upon discharge from the military I returned to college at Pittsburg State University in Kansas and ran track, cross country and the marathon in two National Collegiate Championships finishing 10th and 18th. After getting my Master’s Degree I returned to Norfolk, my home town, and was a high school teacher until I retired in 2002. I was one of the first members of the Tidewater Striders and I competed on a high level until my hips wore out in 1987. My best times are: 5K-15:40, 10K- 32:11, half marathon-1:11:32, and the marathon in 2:29:14. I had both hips replaced in a 25 year span and did not run until I decided to see if I could make a comeback in 2012. I recently published a book titled Hip! Hip! Hooray! I'm Running Again! My goal is to continue to run 4-5 times a week, promote running, and encourage others whether they are beginning runners or recovering from an injury. Some of my favorite experiences were running on teams so I am elated that I have been selected to represent Running Etc. as an Ambassador.