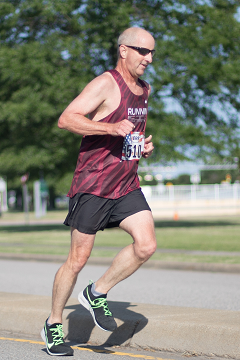 Mike grew up in Alexandria, VA. As a teenager, Mike raced motocross which fueled his enthusiasm for competition. At age 19 he began his running career where he instantly became addicted to the sport. After graduating from Old Dominion University in 1985 he decided to make Hampton Roads his home. His dedication to the sport of running began with his support of the local running club, the Tidewater Striders. If Mike was not racing on the weekends he was probably volunteering. He measured the race courses for the club for over twenty years. Mike was the race director for the Distance Series for 8 years, the Tidewater Strider Summer Series for 10 years, and directed over 60 events for the club. The Tidewater Striders presented him The Volunteer of the Year award in 1994, and he received the prestigious RRCA National Volunteer award in 1999 for "generous and enthusiastic contribution of two thousand hours of volunteer time in support of the running community." One of Mike's greatest running honors was being inducted into the Tidewater Striders Hall of Fame in 2012. Mike has a passion for competition and enjoys racing for the challenge, thrill and the social atmosphere. Mike especially enjoys talking to newcomers about the sport. His race distances have included 5k races to the marathon, adventure races, mountain bike races, off road triathlons and duathlons, even an ultra. When he is not working or running, he enjoys riding bicycles and playing guitar.